How One is Not Always the Other

Muscle building and fitness, contrary to popular belief they aren’t always the same thing. In this article want to talk to you about the benefits and pitfalls of muscle building and how it relates to fitness, and why surprisingly how building muscle could leave you weaker and far less fit than before you started.

Bruce Lee, considered by many the epitome of functional fitness was once running with his friend and student Dan Inosanto, along Santa Monica beach, home of bodybuilders galore, were out jogging, when suddenly out of the gym came a colossal behemoth of a man….Inosanto, impressed said to Bruce Lee “ Man look at the arms on that guy!” Bruce’s insightful reaction was “Yeah, he’s big – but is he powerful? Can he use that extra muscle efficiently?”

This story is an excellent starting point to discuss when muscle building and fitness are not the same thing. All too often I see a parade of injuries enter my clinic as a result of muscle building exercises such as the Bench Press and Deadlift. While these are two of the best techniques to improve your strength, muscle mass and fitness, they can also result in serious injury.

The bench press is perhaps the chief culprit here – doing serious damage to the rotator cuff. I’ve lost count the amount of time’s I have had to rehab someone from those injuries.

In the quest to compete with the image presented on television and in the popular magazines, an unrealistic and unhealthy trend is beginning to develop, advertising and implying that muscle building and fitness are the same thing. Many of the people that come to me, (and most of them are young men) want to build big muscles on their chest, biceps, abs and legs – notice anything here?

They are all the muscles you see on the front. As such the back is neglected and the smaller muscles that help the big ones to function are ignored. Muscle imbalances and injuries follow. It’s not good just to focus on muscle building for the front of the body, the mirror muscles; you are only going to lead to injury.

Another example that springs to mind illustrating the concept of muscle building and fitness being contrasting ideas is that of over muscular development, even if it is balanced. Many of the large muscled bodybuilders compromise their ability to function in order to achieve their size – thus when called upon to perform physical tasks they fail and often end up with serious injuries. 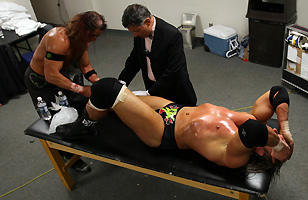 With a large imposing, hugely muscled physique, wrestler, bodybuilding and author, Triple H is required in his job title to be functionally fit. He needs to move quickly and be flexible. However his over muscled physique is more than his body can handle – and while simply walking from one side if the ring to the other – he tore his quadriceps, the muscles on the front o the leg. Several years later, he repeated the injury in the same manor. Muscle building and fitness are two different things here. While possessing an incredible physique as a result of muscle building he is certainly not fit, he is so over developed a simple function like walking results in a crippling injury.

The same can be said of his colleague David Batista, another hugely muscled man, who was rendered, injured with a torn bicep, simply because they became too big for his skeletal system to support.

Muscle building and fitness should ideally complement each other – build muscle to make you stronger - to help you function better. When you build muscle to a point where it compromises your ability to function, ask yourself, what you really want and if the price is worth it. Isometrics is an ideal solution as it develops the body within response to itself and develops a body that is not only well built, but primed for peak performance and functional fitness – do you want to look good and not be able to match that physique to ability or would you prefer to have a stunning physique that is only second to exceptional physical ability – I know what I want which is why I focus on Isometrics and the development of functional fitness.

In my book "7 Seconds to a Perfect Body" I talk in depth about the dangers and damage caused by weight lifting that can easily lead to similar injuries to those mentioned above and how you can avoid them using Isometrics. A great example of this relates to the abdominal muscles and lower back – the central junction of power, stability and strength in the human body.

Think of the current obsession with the 6-pack, men and women spend hours doing countless repetitions of crunches and see no results save strained and sore necks, injured backs, poor posture and low back pain! There is an easier way – one 7 second contraction can provide all the stimulation you need to develop tight solid abs. You can find out what the one exercise (plus a few more) here in my e-book and video guide. Not only that but it develops strength from the inside out that increases your total strength, not just in your abs and lower back, but in your whole kinetic chain, improves your digestion, nourishes your internal organs, creates energy and leaves you with a flat washboard stomach. And that’s just one exercise. This is how muscle building and fitness should work – hand in hand to promote health and fitness in every capacity. Check it out here - 7 Seconds to a Perfect Body!